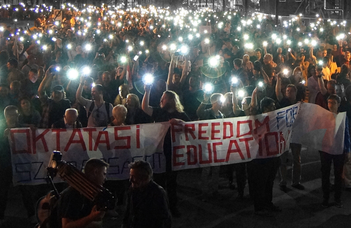 Gergely Kováts (BCE) and Zoltán Rónay (ELTE PPK) have conducted joint research by which they tried to investigate and explore the pattern of academic freedom in Hungary. Their study's initial findings were published in the Global Observatory on Academic Freedom (GOAF). Although the study concluded that institutional restrictions on academic freedom could not be identified or demonstrated, it was possible to find out several problems in the legislative and environment and practically. Furthermore, the study mainly focused on the self-censorship of scientists, especially those engaged in the social sciences.
During the past two decades, the issue of academic freedom has gained considerable attention in many countries worldwide. For example, Gergely Kováts and Zoltán Rónay attempted to investigate and explore the extent to which academic freedom can be enforced in Hungary in the current time, where each of scientific actors, professionals, researchers and educators work in a specific situation, on the border of the eastern and western worlds, economically halfway between development and development, in ever-changing legislative and institutional environment.

According to this study, the researchers used a complex methodology, where legal documents were analyzed in detail. Furthermore, based on the structure of the institutional system, guarantee elements were examined. In addition, the study conducted semi-structured interviews with more than 30 teachers and researchers. These interviews aim to understand how they experience academic freedom in their daily work.

What does the law say?

During the review of the legal regulations of education and research, researchers were confronted that the current Hungarian legislation does not mention academic freedom. Instead, it uses specific terms such as freedom of education and research. In fact, regulation lacks both the right to disseminate knowledge as well as the right to form the scientific community, which is closely linked to institutional autonomy. In addition, the fundamental law, which should contain the main guarantees, limits institutional autonomy to "the contents and methods of research and teaching". Furthermore, under this legislation, these freedoms belong to higher education institutions and not to individual teachers or researchers. Based on that, the question of this study is the following: if the institution can restrict the rights of academics in teaching or research, how can the state guarantee the freedom of education and research?

As a result, although the legislation has since been revised, and does not explicitly limit academic freedom, it does not provide its appropriate protection. As a result, whether these rights are honoured or violated is totally dependent on the individual beliefs and wills of individual decision-makers, institutions, or political actors. Because these people are often not scientific experts, they do not make decisions from a professional standpoint.

Obstacles Beneath the surface

The examination of the institutions and interviews with teachers and researchers confirm the previous conclusion: while we may encounter measures from time to time, primarily governmental ones, that raise the possibility of violating or clearly implementing academic freedom, there are no systemic measures in Hungary today that specifically restrict academic freedom.

In fact, researchers are supported and encouraged to publish in international journals, and there are no direct restrictions on the selection of research topics in education. However, several troubling events cast a shadow over real scientific independence. In other words, they are not independent of the shortcomings or contradictions of the legislation.

Nearly one-third of survey respondents reported that they could not access data on sensitive issues to the political climate, such as research with refugees or convicts. This could happen because the heads of the institutions contacted do not dare to decide or react, and the researchers' requests for permission are often directed to the superior bodies, where the case gets stuck. Other respondents claimed that their choice of the topic mainly depends on the state's funding or support. In addition, the politicization of certain issues, such as gender or minority rights, has also emerged as a problem in education. Furthermore, several teachers said that they preferred not to express their viewpoints or opinion on these matters, particularly during online education, since doing so may put them in trouble if students recorded them and used them out of context. These examples demonstrate that, despite the absence of systemic censorship or limitation, scientific actors often encounter roadblocks or use the tactic of self-censorship for a variety of reasons.

What is the solution?

According to this study, the current situation could be significantly improved by changing the legal framework. The previously mentioned limits on teaching and research activities might be avoided or held responsible if the law explicitly declared academic freedom and who is entitled to this right, and within which framework it would be included in the Fundamental Law.

Consequently, the study further emphasizes that, in the course of both the application procedures for grants and the operation of the members of the body overseeing research institutes, decision-making must be made transparent to strengthen the academic community’ self-government both culturally and legally. This is complemented by the proposed similar measures for model-changing institutions that make the functioning of the boards of trustees and the selection of members transparent.