PPK students are among the best athletes of the year 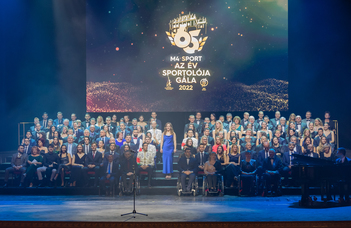 For the 65th time since 1958, the Hungarian Sports Journalists' Association chose the best of the year, with the awards decided by the MSÚSZ, the awards for the best athletes by the delegates of the Hungarian Paralympic Committee, and the Sports Moment of the Year by the viewers of the M4 Sport channel. The results were announced on January 9 at the Opera House in 11 categories.

Several ELTE athletes received awards at the gala. Bianka Pap, a first-year student of the Faculty of Law and Political Sciences, was awarded the title of female para-athlete of the year, while Liza Pusztai, a fencer and student of the Faculty of Education and Psychology, was awarded the title of "Team of the Year - Individual Sports" as a member of the women's sword team.

At the event, we were also able to compete for the Carpathian Basin Universities Cup (KEK) organized by BEAC, since the event, along with the Balaton Swimming and Ice Rink Night, was also included in the top three leisure sports events of 2022 (in this category, the Balaton swimming got the most votes).

'It is a great recognition that with a relatively young event we can be on the podium in such a field - said Simon Gábor, the director of the BEAC in an interview with him after the event. - The KEK has come a long way in recent years, the number of participants has increased 15 times, that of the sports increased 10 times, but perhaps we are most proud of the fact that every year since 2010 there are students in Cluj-Napoca, Beregszász, Csíkszereda, Vojvodina, Felvidék, Budapest, as well as rural universities, for whom it is important to come and participate in the first weekend of March take it at the event,' said the sports manager.