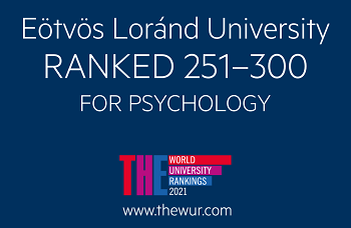 ELTE is the best university in Hungary in the field of psychology according to the 2021 ranking of the Times Higher Education. Our psychology training is still among the top 300 institutions in the world.

The Times Higher Education ranking releases the ranking of the specialisations of the best universities in the world every autumn. The British organisation announced the latest 2021 ranking on the 28th of October in which 1,512 higher education institutions around the world were evaluated in 11 disciplines.
This year Eötvös Loránd University is among the best universities in the world in six disciplines, three of which (psychology, inanimate sciences, informatics) kept last year’s position. In the field of psychology, ELTE is at the top of the Hungarian universities (251–300), while the University of Pécs is in the 401–500 category and the University of Szeged in the 501+ category.
At the top of the Psychology ranking, there are the following universities in order: Stanford, Princeton and the University College London.

ELTE PPK also surpassed all its regional competitors in the ranking: the Masaryk University and the University of Warsaw are in the 301-400 category, and the Charles University is in the 401–500 category.

Detailed results can be found by country and field on the website of THE.