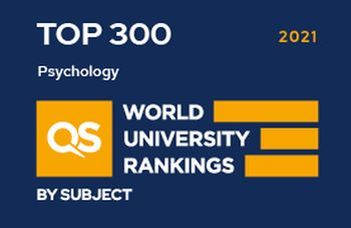 ELTE PPK preserved last year's 251-300. place in the field of psychology in the QS ranking. Out of the Hungarian universities, only ELTE PPK's training is included in this year's list of the well-known London-based organization.

QS (Quacquarelli Symonds) published the results of its recent ranking of disciplines On March 3, which compares institutions primarily based on the scientific results and publications of faculty members. The editors of the list ranked 51 narrower disciplines within five broader disciplines (humanities, engineering and technology, life and health sciences, natural sciences, and social sciences). A total of 1453 higher education institutions in 157 countries were classified for evaluation, and almost 14 million publications were considered.

Eötvös Loránd University, in the list of psychology courses, similarly to the previous year, is in the 251-300. place. The importance of the prominence is only heightened by the fact that QS ranks psychology among the life and health sciences, as opposed to other rankings that typically mention the field among the humanities. The British agency also ranks Babeš-Bolyai University in the TOP 300 among the universities teaching psychology in the region and the University of Warsaw in the 201-250. place.

There is no change within Hungary either: in the field of psychology, only the training of ELTE PPK was added to the QS list.