Eastern European Mathematics Education in the Decades of Change 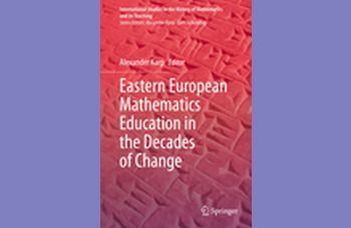 Springer Publishing published a book on the characteristics of mathematics teaching in Eastern Europe after the change of regime. The authors of the chapter summarizing the Hungarian aspirations are János Győri, professor at the Institute of Intercultural Psychology and Education of ELTE PPK, and Katalin Fried, Gabriella Köves, Vera Oláh and Józsefné Pálfalvi, key figures in Hungarian mathematics education, mathematics talent management and professional methodology.

This contributed volume is devoted to the recent history and evolution of mathematics education in Eastern Europe, exploring how it was influenced by social and political changes in this part of the world. Despite the broad recognition of the importance of these changes, little scholarship exists that examines the ways in which they were followed by changes in the teaching of mathematics in the post-socialist countries. Indeed, the analyzed processes are complex and vary across the states. Accordingly, this book touches on many factors--including differences in cultures and traditions – that find expression in the teaching of mathematics. Specifically, this volume seeks to explore what changes there were in education in general and in the position of mathematics in school education in these years, and how these changes may be explained and documented; what changes there were in the content of mathematics education and its assessment, and how were they motivated and adopted; what new textbooks appeared and what new methodological ideas were offered in them; how and why mathematics teacher education and/or professional development changed; what was the role (if any) of foreign influences on mathematics education, etc.The book will be of interest to both researchers in mathematics education and practitioners-teachers, as well as a broader audience of historians and educators exploring the political aspects of education.

More about the book here.